About The Best Toledo Mexican Restaurant

About Our Toledo Mexican Restaurant

You Won’t Believe Our History! 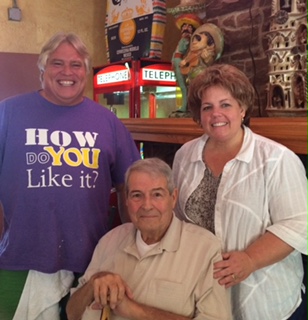 In 1919 a man named Fred Stork opened the Stork Nest at this address, then a reputed speakeasy that illegally provided booze, gambling, and women of easy virtue. The gangster Licavoli provided the liquor, his gang a faction of Chicago’s infamous Capone mob. Capone would visit Licavoli here at the Stork’s Nest, where they would practice their skill with firearms on the back acreage.

Jack Kennedy’s gangsters were the rival faction locally during the Roaring Twenties. Once they tried to take over the liquor at the Stork’s Nest by forcing the Stork family and their help against the wall at gunpoint. That scared Mr. Stork out of business. He opened the Corner Store at Heysler and Bancroft, having sold the Stork’s Nest to a Harold Miller, who ran it until his death in 1973. Art and Jeanne Lang started remodeling the Stork’s Nest in 1973.

Only the buildings original shell was used after six months of complete refurbishment inside and out. It also had a new name— the Cow Palace. In February 1978 Jim and Rhonda Baldwin took over carrying the name “Carmel’s,” which began at 606 Oak Street in East Toledo. In November 1984 after some painting and remodeling the restaurant was opened once more, named Ventura’s.

In 1990 the building underwent a major overhaul. New restrooms, dining rooms and kitchen were installed for your convenience. In 2002, Ventura’s need for additional dining room seating was met, with the expansion of a beautiful garden room, now allowing us to provide three dining rooms for our customers.

Entering upon our 27th year of business, Ventura’s built and opened a beautiful new Patio addition in July of 2011. This outdoor seating created a relaxing atmosphere for those wishing to enjoy dinner, or to just sit back with friends and enjoy a few cocktails.

We sincerely hope you enjoy our food and hospitality.

How Can We Serve You